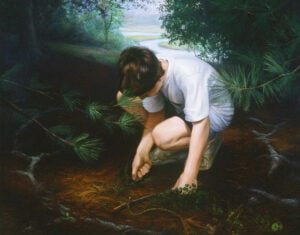 It is very exciting to see an artist’s growth presented in such an intelligent and diligent manner – from the very beautiful iconic portraits of objects and of people to the most recent interiors: where Johnson literally steps out into space to meet the challenges of relationships and content that go into the process of picture-making’

She has proved that she can put down in paint anything that interests her with great precision – capturing form and exquisite detail.

She shows such a fascination with the details that is all the more intriguing when she allows areas in some of the recent paintings to have a pictorial ambiguity, such as the blue boat in Boatbuilder or the shirt and sky in Boy in the Woods.

She is stretching herself into areas of picture-making in Boatbuilder. This painting is spatially intriguing: we are drawn to the distant door in the center of the picture – but, in order to reach it we must pass under the mysterious blue boat in the loft above – there are all sorts of inviting elements – we want to look at the things on the workbench – go up the stairs and look out the windows.

The new paintings invite (no, demand) one to participate. I feel the excitement of the artist and share the elation of discovery.

I can’t wait for more to come.

When Barbara Johnson (MFA ’77) looks at a Renoir painting of a teacup, she sees all the colors – red, green, yellow, blue – that make its whiteness. (That Renoir started his painting career in a porcelain factory suggests how intimately acquainted he would have been with the look of china.) Contributing to Johnson’s acuity, and coloring her own approach to painting, are her keen eye, extensive knowledge of art and an awareness of, as she puts it, that “so much of art is science.” In her paintings, art and science join to produce work that is both evocative and articulate.

At UMass in the ’70s, Johnson studied drawing and printmaking; portraits chiefly comprised her senior thesis. Inspired by the feminist writings of art critic Lucy Lippard, Johnson focused on women, portraying them in roles other than the traditional “mother, daughter, lover,” as she puts it, with a laugh.

In San Francisco, where she had moved after graduation, she decided to learn to paint. Her studying took a classical approach; for instance, she learned how to mix colors before ever touching brush to canvas. It was during those studies that she had her revelation about the scientific side of art. Even now, 20 years later, Johnson becomes animated as she describes the technique, involving a combination of pigments and brushes used by Northern Renaissance painters to simulate on canvas the appearance of fur. 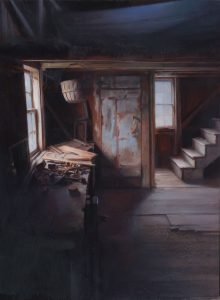 While Johnson is a realist painter, her work is far from formulaic. The oils and pastels in “Poetics of Place,” Johnson’s recent one-woman exhibit at the Springfield Museum of Fine Arts, reveal her work’s individual style, emotional content and narrative elements. Boatbuilder, for example, conjures a dark barnlike interior so vividly that you can practically smell the wood shavings, yet the economy of the depiction leaves room for a story to emerge as well. The trapezoidal shape, with curved edges, of an overturned rowboat – stored in a loft – hovers like a specter at the top of the painting. The questions drift before the eyes like dust motes in the workshop’s atmosphere: Who is the absent artisan? Is his work done for the season – or forever? Is this a place that even when occupied had a lonely solitude to it? The painting doesn’t hold out answers, but succeeds perhaps because it simply raises questions. Among Johnson’s favorite artists, she says, are Balthus, Titian, Giorgione, Pieter de Hooch, Lopez Garcia, Vincent Desiderio and Remedios Varo; and what attracts her to their works is that they have “mystery … a narrative.” She adds, “You don’t always have to know what the story is,” but for herself, “the story is part of the intention, what gets a painting made.”

Portrait of Diane is a very different painting. It seems filled with light, partly due to the satiny blue background and the smooth surface. The subject’s head dominates the space. The brightness and the crisp, detailed rendering give the painting the verisimilitude of a photograph. But like photographs, it only seems to tell the unvarnished truth. The expression is captured, but the personality is elusive. Diane’s half-smile plays against her direct gaze, and as we survey her, Diane seems to survey us. If Boatbuilder succeeds in suggesting “the presence of people without putting a person in,” as Johnson says she likes to do in her interiors, this portrait implies that a person is far too complex to be contained in a painting.

In addition to portraits and interiors, Johnson also produces still lifes and landscapes, some of the latter drawn from the view outside her studio window. Having “made the pilgrimage” back to western Massachusetts in 1987, she has lived in Hadley, across the road from fields and tobacco barns for about eight years. Johnson is right at home in farmland; she derives inspiration from her childhood spent in “rural communities” in Illinois, Wisconsin, Indiana and upstate New York, where she had “adventures in nature all the time.” She recalls “going happily around with my two younger sisters, finding things in barns, wires, tools. We had no idea what they were for, but they had a kind of power. As a child, you make up what they mean.”

Memories like those surfaced in 2002 as she poked around a UMass barn. She was scouting locations for a painting commissioned by UMass Magazine, one of a series of works by alums. The result, Old Horse Barn, is redolent of the life of a stable, although the horses are gone, a poignant reminder of an earlier time, when the Ag School was the heart and soul of the university. In charting the course of her work over the last 20 years or so, Johnson credits doing that painting with a newfound interest in the rendering of space. “I started out attracted to gesture, its revelatory power. That led to a focus on form, the challenge of making form manifest on a two-dimensional plane. Now I want space. I’ve gone from the contents to the container: gesture, object, space.”

Johnson supports herself through the sale of her work (she’ll have another one-person show, “Shaping the Light,” next February at New City Art in Easthampton), commissions and by offering art classes to adults. Motivating her is, she says, “faith in the validity of art, the power of art, the image, even in a time when imagery is used so much by advertising and television to manipulate people,” and the challenges and rewards of “making things by hand, the physical extension of one’s self – that’s the other realm of gesture.”