1969
on the heels of Abstract Expressionism

I am accepted into the BFA Program at Indiana University, Bloomington.
I create big expressionist interpretations of Renaissance Masterpieces.
Most were done in monochrome, oil and tempera paintings.
I want to draw like Leonardo—I enroll in an Anatomy class.
5 credits, pre-med—Wrong way to go. 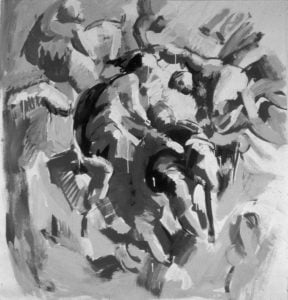 War in Vietnam.
Protests. Profound.
I begin my quest for a way to make things REAL.

All the while, drawing, drawing, drawing. Rembrandt! Goya! Social relevance-graphic richness. Color must wait.
1975 I am lured into the medium of intaglio and am delighted to find there is a wave of painters making prints. Chosen for a Teaching Assistantship, I earn an MFA in Printmaking from the University of Massachusetts in 1977. My thesis: Portraits from a New Landscape, large scale etchings and lithographs. Non traditional, candid portraits of women as professionals, feminists, vibrant contributors to my local community.

Still thinking BIG, I move to the Washington, D.C. area and receive an Art for Public Places Grant, 1977 through 1978, with Maryland National Capital Parks and Planning Commission. That is followed by the award of an Artist in Residency at Bowie State College, Maryland, 1979 to 1980. I teach printmaking, drawing, color and design in area colleges and Universities. I study Anatomy at the Corcoran.

I move to the Bay Area and set up an Etching Studio in, the Emeryville Artists Cooperative. I join the Board of the California Society of Printmakers and get involved in organizing, and participate, in a two year International Traveling Exhibition, I teach printmaking at ASUC Studios, the University of California, Berkeley. In Vallejo, CA I work on the designs and execution of several large scale murals for outdoor theaters at Marine World Africa USA, 1986.

Exciting to work on that scale. I have several exhibits in the Bay Area.
Still obsessed with a love of light and color. Vermeer! Who doesn’t love him?
1981 I finally am introduced to Classical Painting Techniques, color temperature and further study of Anatomy. Joining Vermeer.

Halleluja.
The advent of Photorealism

1980’s. Continuing to search for classical painting methods, Photorealism arrives and paves the way for art market comfort with subject matter. Voilà! The return of representational painting and of classical painting technology. After developing the skills to convincingly render space, form, atmosphere, and the color of light, I begin a new chapter in my expressions. Á la California, I pursue a personal candid realism in my still life subjects–I paint realistic compositions of colorful patterned paper bags.

Returning to New England, I find I can paint a cantaloupe—skin and all!!! Conservative ideas start occupying realism. Content is loaded imagery. I fight back with jazz inspired color. I have a show at Thronja Gallery in Springfield, MA 1988. They loved those bags. I teach Painting and Drawing at Smith College, 1989, 1990. I create a trompe l’oeil installation piece for Dietz & Co, Architects, Springfield, MA 1991. Observing my sons continual foray into the wilds of nature, I begin to make a series of paintings, called by one reporter, affectionately “Boy in Dirt Art”. I exhibit locally, Hart Gallery, Northampton, MA 1994-1996, William Baczek Fine Art, Northampton, MA 1996 to 1998. R. Michelson Gallery, portrait commissions, Northampton 1999 2002).

1995. I am invited to teach a course I designed on “Foreshortening and the Human Figure” at the Academy of Realist Art (now the Gage Academy) in Seattle.
1999. Work included in Best of Sketching and Drawing, Terry Sullivan, Rockport Publishers

2002. The University of Massachusetts, Alumni Magazine commissions me to do a campus portrait. Meandering down the campus path, I discover again and choose to paint the Old 1894 Horse Barn. It is a gorgeous piece of architecture—stately elegance and efficiency in design. Holds many memories. After appearing in the Magazine a movement begins, Preserve Umass forms, and saves the Horse Barn from demolition…And, guess what… 10 years later it has become part of a whole new development within the College of Natural Sciences and the Center for Agriculture. Can I credit the power of art, just a little?
2003, I have a solo show at Deerfield Academy, followed by a Solo Exhibit at the Springfield Museum of Art in 2004. And an article in UMASS Alumni Magazine, “Motivated by the Power of Art,” article by Faye Wolfe. So far the journey has been from gesture, to object, to spaces, to places.
2005 to 2007, represented by Sherry French Gallery in New York.
Two of my “barn paintings” were placed in her collection.

“The Logic of Watercolor”

A few years back, 2002, I was invited by Stephen Doherty, Editor of American Artist Magazine to write an article about learning watercolor after years of oil painting for Watercolor Magazine. In 2008, I begin using watercolor to provide an appealing, ironic contrast—a lighter way of interpreting my new heavier urban subject matter of bricks, buildings and demolitions.

“Art is the greatest export of the human condition.”

Overheard on the radio. If so, then this necessitates a commitment to cultivating visual literacy. All along I have continued to teach a variety of painting and drawing courses, including—Anatomy for Artists and Painting. I believe in sharing skills, I continually search for new perspectives on art from the past. I support a dialog about contemporary and historic movements in art, and the valuable self-observation all of this brings.
2010 to present, represented by Renjeau Fine Arts Gallery in the Greater Boston Area.

Time and Transformation
Contemplating life in the margins
of American cities and towns.

2012. Solo Exhibit of my recent paintings of the Urban Landscape is shown at Hampden Gallery, University of Massachusetts, Amherst. Currently, I am a member of the Easthampton City Arts+, a dynamic local artist community, working with regional artists—many like myself—with studios housed in old mills in the New England factory town of Easthampton, MA. 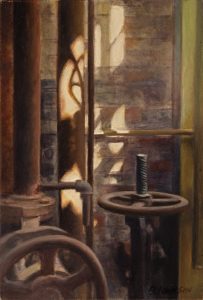 2014 I discover the Boiler Room at MASS MoCA in North Adams Massachusetts. I create a series of paintings, inspired by the old pipes and engines that heated the factory, another passing scene from the golden age of these old ships of industry. One can imagine the sounds of them in action. At certain times of day the light pours in creating patterned light shapes creating the atmosphere of an Industrial cathedral.
My present environment and traveling to and from it, provide the subject matter in my new work.
2018 I find more inspiration from a Mineral Mining Company in Adams, Ma and Mill Interiors in Holyoke, Ma
Like the paving stone shifting under the foot of the character Marcel
(in Proust’s novel, The Remembrance of Things Past) releasing a cascade of memories, I too, find my environment continually gifting me with images and sensations rooted in a more unconscious past.

My work is in many private collections, both here and abroad.

Still “tryin’ to make it real…compared to what?”

“Compared to What” from the 1969 album, Swiss Movement, Les McCann trio,
Written by composer/artist Eugene McDaniels.