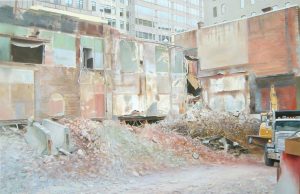 Twenty years ago, watching the US invasion of Afghanistan and the Shock and Awe campaign of the Iraq war through the window of the television, I looked out of my studio window and became aware of the simultaneous destruction and abandonment of our industrial era. “Creative destruction”* as the electronic economy took root–rapidly evolving, as well as the earth, too, relentlessly reclaiming abandoned, decaying structures with native and invasive plants. This subject matter has personal and, at the same time, social and political implications. These economic realities belie so many fragile communities.

In my work spaces like the switchyards, the industrial areas, the engines of the cities and towns and the economy, as well as the abandoned sites and industrial remains are all observed. Artists of the Middle Ages recorded the realities of everyday life in the margins of illuminated manuscripts; the center reserved for the doctrines dogma. Like the manuscript facades that dress up Main Street, much of the reality of our lives is carried out in the alleys, the backyards, the switchyards, the views from the train window -the margins,.

Growing up in a transient, post WWII family, the views from the car and train windows established an important sense of place: the spaces that filled the distances between our old and new homes. Scrolling past those windows, the architecture and occupations observed have a familiar feeling to them. I watched old homes and communities dissolve into the distance, and new ones eventually spring up on the horizon harboring new regional identities and experiences that would require my adaptation. This landscape now reveals to me a bigger, more universal picture: the constant movement and revision of the American identity, our values, with the requisite continual retooling for survival. 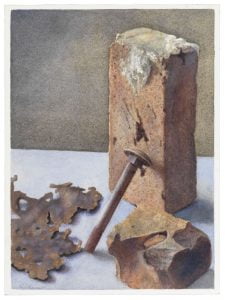 These spaces of decay and rapid change are also places of speculation and incubation; fertile places for reverie.

In my “Time and Transformation” series: I examine urban landscapes from the margins and byways of American life and commerce, and still lifes of the found materials from these locations. Forms of Vanitas.

I paint the power lines, smoke stacks, cyclone fences–cranes for demolition and construction–and they become a kind of pictorial cat’s cradle, darting about the landscape, manmade structures suspended in time.
It was a poetic revelation to me that the pulverized brick, metal, and concrete lacing around the base of the skeletal structures–in both the ruins and new construction sites–is analogous in nature to the pulverized pigments that I use to build a painting. We are all in the construction business.

I continue to examine these questions further as I sift through the remaining shapes and patterns, studying the tensions between ruin and regeneration.

* Joseph Schumpeter in his work entitled “Capitalism, Socialism and Democracy” (1942) to denote a “process of industrial mutation that incessantly revolutionizes the economic structure from within, incessantly destroying the old one, incessantly creating a new one.”